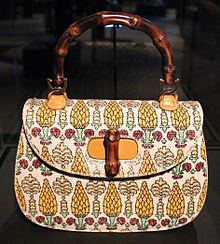 The Gucci family claims its origins are rooted in the merchant city of Florence since around 1410. Guccio Giovanbattista Giacinto Dario Maria Gucci (1881–1953) left Florence for Paris, and settled in London in 1897 to work at the high-end Savoy Hotel. While working as a bellhop there, he would load/unload the luggage of the hotel’s wealthy clients, learning about their tastes in fashion, quality, fabrics, traveling conditions… Then he worked 4 years for the Compagnie des Wagons-Lits, the European rail company that specialized in upscale travel leisure, thus further enhancing his experience with luxurious traveling lifestyles. After WWI, he worked for the maker of fine luggage Franzi.[5][6]

In 1921, Guccio Gucci bought his own shop on 7, Via della Vigna Nuova in Florence, Azienda Individuale Guccio Gucci,[7] where he sold imported leather luggage. He also opened a small workshop to have his own leather goods made by local craftsmen. Eventually, a larger workshop had to be acquired to house Gucci’s 60 artisans. In 1935 the invasion of Ethiopia by Mussolini led the League of Nations to impose a trade embargo on Italy. Leather became scarce, pushing Guccio Gucci to introduce other fabrics in the composition of the products, such as raffia, wicker, wood, linen and, jute. The rombi motif, a Gucci signature, was created. The Gucci’s developed a new tanning technique to produce “cuoio grasso“, which became a Gucci trademark. In 1937, Gucci launched its handbags.[6][5]

Guccio’s wife and children all worked in the shop. Aldo, the son of Guccio, became increasingly involved in the family company since he started working there in 1925. He convinced his father to grow by opening a new shop in Rome (21 Via Condotti) in 1938, and launched more Gucci accessories (gloves, belts, wallets, keychains). During WWII, the artisans of Gucci worked on making boots for the Italian infantry.[6][5]

The company made handbags of cotton canvas rather than leather during World War II as a result of material shortages. The canvas, however, was distinguished by a signature double-G symbol combined with prominent red and green bands. After the war, the Gucci crest, which showed a shield and armored knight surrounded by a ribbon inscribed with the family name, became synonymous with the city of Florence. After the war, Guccio Gucci distributed the shares of the company to his three sons (Aldo, Vasco, Rodolfo). In 1947, Gucci launched the Bamboo bag.[8] The brand launched its first global tagline, Quality is remembered long after price is forgotten. The iconic moccasins (Gucci loafer) were launched in 1952. Guccio Gucci died on 2 January 1953 in Milan. In November 1953, Gucci opened its first US store on 5th Avenue and 58th Street in New York. A second NY shop opened in the Saint Regis Hotel in 1960, and a third on 5th Avenue and 54th Street in 1973, leading the locals to call this NY area “Gucci City”.[5]

In 1961, Gucci opened a store in London and Palm Beach, and launched the Jackie Bag. In March 1963, Gucci opened its first French store near Place Vendôme in Paris.[5] The double-G logo for belt buckles and other accessory decorations was introduced in 1964.[9] The Flora scarf was designed in 1966 by Rodolfo Gucci and Vittorio Accornero for Grace Kelly Princess of Monaco who became a notorious consumer of Gucci products. In October 1968, Gucci opened a store on 347 Rodeo Drive, driving many Hollywood stars to endorse the brand. With the Rodeo Drive opening came the launch of Gucci’s first dresses. Gucci’s breakthrough in the US led to its global development in Asia (Tokyo opening in 1972, Hong Kong in 1974) and the Middle East.[5] In Brussels, Aldo’s son Roberto piloted the first Gucci franchised store. By 1969, Gucci managed 10 shops in the US. 84,000 Gucci moccasins were sold in the US alone that year. The US President John F. Kennedy called Aldo Gucci the “first Italian ambassador to the United States”.[6]

Gucci launched a Rolls-Royce luggage set in 1970[5] and partnered with American Motors Corporation (AMC) to create the Gucci version of the AMC Hornet (1971, 1972, 1973). Gucci became one of the first American cars to offer a special luxury trim package created by a famous fashion designer.[10][11][12] Gucci launched Gucci Perfumes (Il Mio Profumo) and its first watch (Model 2000) in 1972, its first franchised store in the US in 1973, and opened the Gucci Galleria in its Beverly Hills store in 1977, a private art gallery adjoined to the store and reserved to premium clients who were given a golden key to access it.[5][6] From 1978 to 1984 a Miami-based coachbuilder marketed a Gucci edition of the Cadillac Seville sedan (the 1978 model is exhibited at the Gucci Museum).[13]

In 1985, the Gucci loafer became part of the permanent collection of the New York Moma.[14]

In 1969, Giorgio, the son of Aldo, had sparked the first family feud by launching Gucci Boutique on his own, which was finally reabsorbed by the family group in 1972.[6] During the 1980s, the Gucci saga eroded the family-held top management of the company and fed the press headlines. Paolo Gucci, son of Aldo, tried to launch the brand Gucci Plus on his own. Aldo was criticized for developing most of the international business under Gucci America which he owned. In 1982, to ease tensions in the family, the Gucci group was consolidated and became a publicly-traded company, Guccio Gucci SpA.[15][5] In May 1983, Rodolfo died. His son Maurizio Gucci inherited his father’s majority stake in the company and launched a legal war against his uncle Aldo for full control of Gucci (a prosecution led by the city prosecutor Rudolph Giuliani, and with Domenico de Sole representing the Gucci family).[5] Maurizio Gucci took over the company’s direction. In 1986, Aldo Gucci, 81, with only 16.7% of Gucci left in his possession, was sentenced to a year in prison for tax evasion[16][17] (in a prison where Albert Nipon was also an inmate[5]). The artwork of the Gucci Galleria was liquidated.[5] In 1988, Maurizio Gucci sold almost 47.8% of Gucci to the Bahrain-based investment fund Investcorp (owner of Tiffany since 1984), and withheld the other 50%.[18]

From 1991 to 1993, Gucci’s finances were still in the red, Maurizio Gucci was blamed for spending extravagant amounts of money on the company’s headquarters in Florence (Via delle Caldaie palazzo) and in Milan. Investcorp bought the remaining 50% of Guccio Gucci S.p.A. from Maurizio Gucci in 1993, ending the family involvement in the group.[19] In March 1995, Maurizio Gucci was shot dead in the lobby of Gucci’s Milan office.[20] His ex-wife Patrizia Reggiani served 16 years in jail for hiring the hitman of the murder.[21]

Despite the family disputes, between 1981 and 1987, the sales of trademarked Gucci products reached $400 million,[22] and $227 million in 1990 alone.[23] The 1980s were characterized by a mass-production of Gucci products, which generated revenue but negatively affected Gucci’s position as an exclusive luxury brand. Maurizio Gucci hired Dawn Mello to put Gucci back on tracks.[24][23]

Dawn Mello[25] was hired in November 1989 as Gucci’s executive vice president and chief designer. She reduced the number of stores from +1,000 to 180 in a move to rebuild the brand’s exclusivity. She also reduced the number of items sold by Gucci from 22,000 to 7,000. She revived the Bamboo bag and the Gucci loafer. She moved Gucci’s headquarters back from Milan to Florence, where the history of Gucci is deeply rooted.[23]

Dawn Mello hired Tom Ford to oversee the women’s ready-to-wear collection.[19] In 1994, Tom Ford was named creative director of Gucci.[26] Ford and Mellow revisited the 1970s archives of the brand. Ford’s 1995 collection, which included the sensual white dresses with provocative cut-outs, became an instant hit.[19] Revived through the hot-bod hedonism of Tom Ford’s creations, Gucci also launched provocative products in limited edition such as silver handcuffs,[27] a G-string[28] and provocative ad campaigns such as the G logo shaved on pubic hair.[29] Domenico De Sole, legal adviser to the Gucci family since the 1980s and CEO of Gucci since 1994, campaigned for Gucci’s leather manufacturers in Italy to keep working together and developed a partners’ program to strengthen their ties. He reviewed the pricing of each product and gradually raised Gucci’s advertising budget from $6 million in 1993 to $70 million in 1997.[30] In October 1995, the company was publicly indexed on the New York Stock Exchange with an initial stock value set at US$22.[19] Then, from 1995 to 1997, Investcorp sold its interests in Gucci for around US$1.9 billion.[31]

By January 1999, the French luxury conglomerate LVMH, which had been buying shares of Gucci discreetly since 1995, reached 34% ownership in Gucci Group NV.[32] Seeking a way out of LVMH’s control, Tom Ford and Domenico De Sole turned to the French financier François Pinault and his group Pinault Printemps Redoute (PPR) for an emergency exit. In March, Pinault’s group bought out 40% of Gucci at $75 a share, and LVMH’s shares decreased to 20.7% in a dilution process. Through the deal, PPR also purchased Yves Saint Laurent from Sanofi and sold it back for the same price to the Gucci Group.[33] This coup d’éclat in the fashion world launched a cold war between LVMH and the new Gucci-PPR coalition.[34] A tension occurred in December 2000 when Gucci bought 51% of Alexander McQueen’s couture house, as McQueen was also the creative designer of LVMH’s Givenchy at that time.[35] The feud around Gucci ended in September 2001 when all parties reached an agreement.[34] By the end of 2003, Tom Ford and Domenico De Sole made it official that they would not renew their contract with Gucci-PPR that ended in April 2004.[36]

Following Ford’s departure, Gucci Group retained three designers to continue the success of the company’s flagship label: John Ray, Alessandra Facchinetti and Frida Giannini, all of whom had worked under Ford’s creative direction. Facchinetti was elevated to Creative Director of Women’s wear in 2004 and designed for two seasons before leaving the company. Ray served as Creative Director of Menswear for three years. Frida Giannini – a Gucci handbag designer since 2002, head of accessories since 2004, and creative director of women’s ready-to-wear and accessories since 2005 – was appointed creative director of Gucci in 2006.[37] Patrizio di Marco, formerly CEO of Bottega Veneta, was named CEO of Gucci in 2008.[38] Both acclaimed and criticized for perpetually revisiting Tom Ford’s archives, Frida Giannini eventually toned down Ford’s explosive ‘Porno Chic’ props over the years “from sexy to sensual”, and started to experiment with ‘androgynous Bohemian’ styles with a 19th-century reminiscence.[39] She also developed “neo-classics” such as the New Bamboo and the New Jackie handbags.[40] Patrizio di Marco focused on the post-2008 crisis with fewer styles and more midrange products.[41] In 2010, Gucci launched a partnership with the auction house Christie’s to develop a wider repository of the brand’s archives and provide an authenticity certification service.[40] In 2011, the company opened the Gucci Museum (Gucci Museo) in Florence to celebrate its 90th anniversary.[42] Between 2010 and 2015, 220 new Gucci stores opened, bringing the total store count to 500.[43] In December 2014, Marco Bizzarri, former CEO of Bottega Veneta, was named CEO of Gucci.[44] He was tasked to reverse Gucci’s declining sales by giving a new impetus to the brand.[45] In January 2015, Bizzarri appointed Alessandro Michele creative director of Gucci. Alessandro Michele had been working for Gucci since 2002 and served as Frida Giannini’s deputy and head accessories designer. During the Fall show of February 2015, Alessandro Michele introduced “a different Gucci”,[46][47] one with a “sophisticated, intellectual and androgynous feel”.[45]

Alessandro Michele launched the Renaissance of Gucci.[48] He revived Gucci classics like the double-G logo,[49] the Jackie O. bag,[50] and created iconic products such as the Dionysus handbag.[51] With a feminized menswear, a strong feminist stance and a ‘geek-chic’ style, Alessandro Michele introduced a postgender props for Gucci.[52]

In September 2016, Gucci inaugurated the Gucci Hub, its new Milan headquarters built in the former Caproni aeronautical factory.[53] In July 2017, Gucci announced the launch of Gucci Décor, the first time the brand tested itself in the home decoration segment.[54] In April 2018, Gucci inaugurated the ArtLab, a 37,000-square-metre center of innovation outside of Florence in Italy, where new leather goods, footwear, new materials, metal hardware and packaging are developed and tested.[55] In November 2018, Gucci opened the Gucci Wooster Bookstore in New York, a 2,000-book shop curated by the founder of Dashwood Books David Strettell.[56] In April 2019, the company launched Gucci 9, a 500-employee network of 6 call centers worldwide for high-end customer service.[57] Gucci also revived its makeup collection[58] and launched its first fine jewelry collection.[59]